The Quinism Foundation is pleased to announce an important new study funded by the U.S. Department of Defense to investigate possible risk factors for the development of neuropsychiatric symptoms from mefloquine, including symptoms that mimic those of PTSD.

For many years, a leading theory regarding such adverse effects is that some individuals are more susceptible than others owing to genetic risk factors. By enrolling those who took mefloquine and experienced either no symptoms, only short-term or transient symptoms, or long-term or chronic symptoms, and comparing these to individuals with PTSD with no mefloquine exposure, the scientists leading this study hope to identify genetic markers of susceptibility to these effects.

You may be able to participate in this study if you either took mefloquine (whether or not you developed symptoms) or have a diagnosis of PTSD but did not take mefloquine. All study subjects must not have a diagnosis of TBI, must be between the ages of 18-55, and must be able to travel to the Bethesda, Maryland, area, for an initial encounter involving several hours and a blood draw. A modest financial incentive will be offered to eligible subjects to participate. 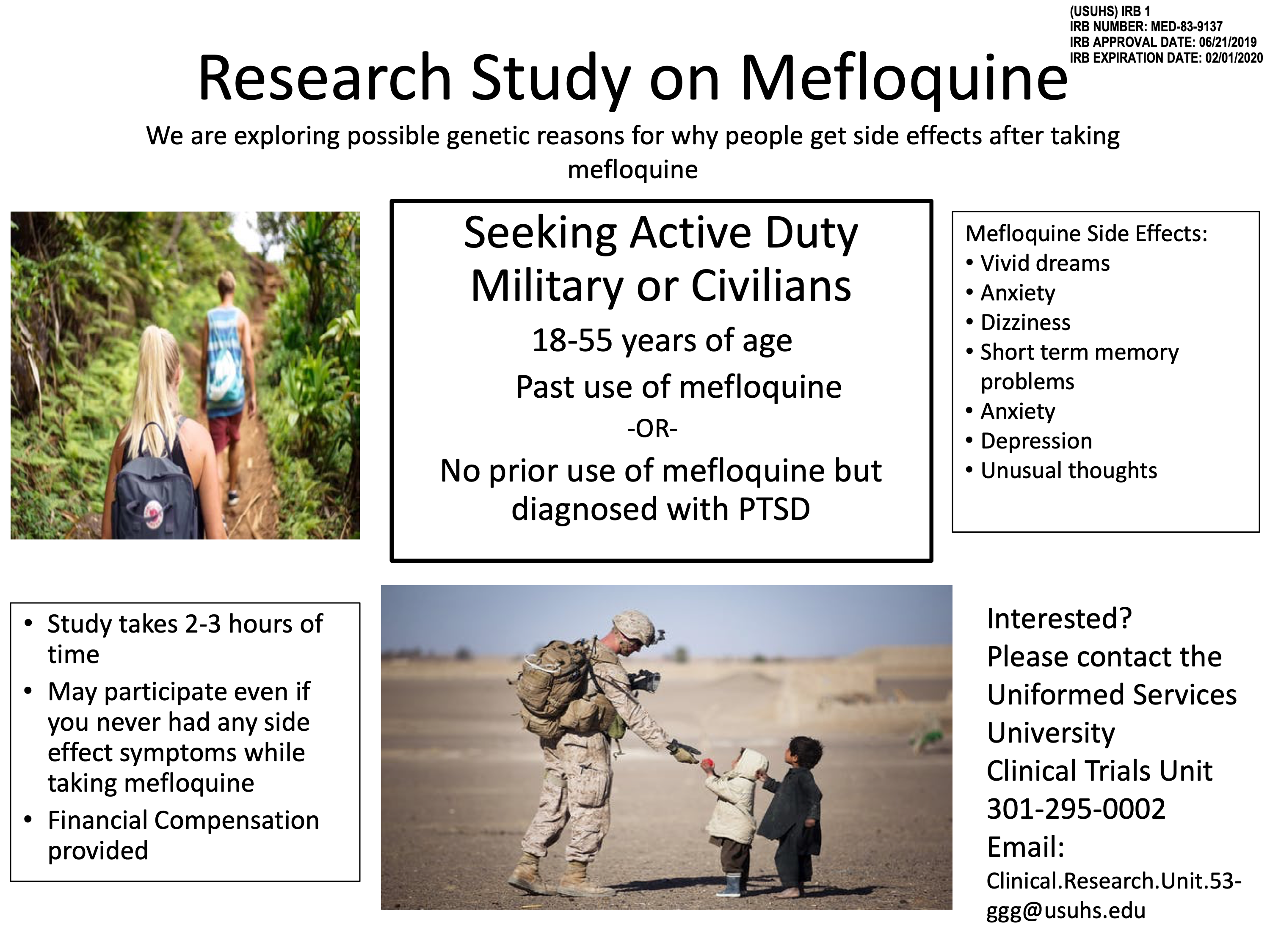 Although The Quinism Foundation is not formally affiliated with this study, the foundation fully supports this effort and extends its thanks to the scientists within the U.S. military who are dedicating their efforts to studying this important issue.

For questions on this study, or to determine if you are eligible to enroll as a subject, please contact the study team directly.

As described in this press release, The Quinism Foundation has sent correspondence to the U.K. Science Media Centre, calling on the organization to correct grossly inaccurate statements on the risk profile of mefloquine that appeared in a release published August 2, 2019 by the organization.

This release included a quote from Dr. Stephen Evans, Professor of Pharmacoepidemiology at the London School of Hygiene & Tropical Medicine, that stated although there “is little doubt that neuro-psychiatric effects can occur with mefloquine (Lariam)”, that “these are very rare”.

In its correspondence to the Science Media Centre the foundation noted that, in fact, according to the manufacturer’s own U.K. drug labeling, mandated by the EMA, neuropsychiatric effects such as abnormal dreams and insomnia are described as “very common”, occurring in over 10%, and that depression and anxiety are described as “common”, occurring in over 1%.

The foundation also noted that the EMA-approved U.K. drug labeling for mefloquine includes a “black box” warning, that very clearly states that psychiatric symptoms “such as insomnia, abnormal dreams/nightmares, acute anxiety, depression, restlessness or confusion have to be regarded as prodromal for a more serious event”, and that patients taking mefloquine “should be informed that if these reactions or changes to their mental state occur during mefloquine use, to stop taking mefloquine and seek medical advice immediately so that mefloquine can be replaced by alternative malaria prevention medication”.

The foundation emphasized that Professor Evans’ statements may have potentially undermined these important warnings.

“Specifically, travelers trusting Professor Evans’ grossly inaccurate statement that neuro-psychiatric adverse effects from mefloquine are ‘very rare’ will be potentially less likely to attribute the very common symptoms of abnormal dreams and insomnia, and the common symptoms of anxiety and depression, to the drug, and thus to stop taking mefloquine in accordance with the manufacturer’s and the EMA’s recommendations, thus potentially increasing the risk of disabling and potentially life-threatening adverse effects from the drug”.

Registration is still open for The Quinism Foundation’s 2019 Annual Canadian Educational Meeting, which thanks to the generosity of our friends at the Royal Canadian Legion, has been moved from the GLo Hotel conference room, and will now be held at Dominion Command Headquarters, in Kanata, Ontario, on Wednesday, September 18, 2019. This larger facility will allow us to accommodate more guests for our revised afternoon session, which will now be held from 1 p.m. to 4 p.m.

Our educational meeting is tailored for our Canadian audience, with presentations on the following topics:

There is still space available for our afternoon session, but please register now to ensure your attendance, as all attendees must register in advance. If you have difficulty with online registration, please feel free to contact us.

Our meeting is timed to coincide with the annual Canadian mefloquine rally, to be held on the steps of Parliament Hill on Thursday, September 19, 2019. To learn more about the rally, please contact The Quinism Foundation’s Advisory Committee member Marj Matchee directly.